On August 3, 2014 I'll be singing at Central Lutheran Church in Minneapolis and it will be the World Premiere of "Kaksi vanhaa suomalaista virttä - Two Old Finnish Hymns" by Finnish composer Olli Kortekangas.

This is pretty exciting...well, actually it's thrilling! 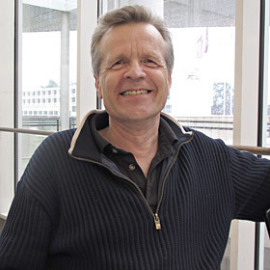 I'm happy to introduce you to him! Here are 3 questions for Olli Kortekangas.

1. Who are you, Olli Kortekangas?

I'm 59 years old, and I've been writing music seriously since I was a teenager. I studied at the Sibelius Academy in Helsinki under the guidance of Einojuhani Rautavaare, and later in (West) Berlin where my teacher was Dieter Schnebel. I taught at the Sibelius Academy and elsewhere for about 20 years myself, but since 2002 I've been a freelance composer, giving a master class or a workshop now and then. I'm particularly interested in the "common territory" of composing and music education, and have participated in or led numerous creative music projects with children, youth and amateur musicians in Finland and abroad.

A couple of years ago, my colleagues and I launched the "Finnish variation" of the New York Philharmonic Orchestra's "Very Young Composers" program.

2. What music have you written?

I've written about 130 works so far for a wide variety of line-ups from solo pieces and chamber music to orchestral works and operas. I'm fascinated by (or maybe obsessed with...) the interaction between words and music - writing for the voice (songs, choral music, operas) is said to be my forte which is probably true. I've written seven operas, and choral works form a major part of my output.

My latest works include Seven Songs for Planet Earth, commissioned by the Choral Arts Society of Washington and the Tampere Philharmonic Orchestra (Finland), and Migrations, a cantata to poems by the brilliant Duluth-based poet Sheila Packa, commissioned by the Minnesota Orchestra in commemoration of the 150th anniversary of Finnish immigration to North America. Migrations is scheduled for performance during the 2015-16 season.

3. What can you tell us about "Kaksi vanhaa suomalaista virttä - Two Old Finnish Hymns"?

The Two Old Finnish Hymns are based on our so-called "Old Hymn Book" of 1701 which was used in Finland for nearly two centuries. I love this book and its hymns which are really powerful - archaic for sure, and sometimes not so easily perceived, also because of the language and its often outdated and shortened words. I've used these melodies and texts in several of my works.

The melody of the second hymn, Herra siunaa meit' ja auta (which is a variation of the classical Benediction - "Lord, bless us and help us") is very special: it is a traditional variant of the original melody, sung to me in 2000 by Mr. Arvi Ruuttunen (who was a farmer and a folk singer, and as it happens, the father of Mr. Esa Ruuttunen, a good friend of mine, who is both a Lutheran pastor and one of the most distinguished Finnish bass-baritones). I knew the text but I had never heard this melody. I think this is an interesting story!

Learn more at Olli's website at ollikortekangas.com and we'll see you in Minneapolis on August 3!